We’ve all played the card game Memory. You know the game, you have to match the pictures together and the person with the most pairs at the end wins. Well until now all you’ve had to match are visuals.  The new iPad game AudioPairs steps into a new frontier and only uses audio. 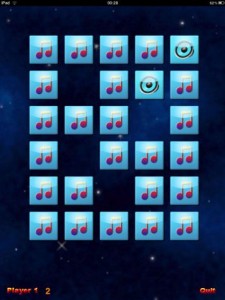 The gameplay is exactly like visual memory. There are rows of icons with musical notes on the tops of them and once a card is selected a small speaker icon shows up while the sound is played. You simply selected the icons and try to match them with their twin. The quicker and least amount of moves will get you the better the score.

The difficulty settings only increase the amount of icons per level, so the easy difficulty is 4 x 4, the medium is 6 x 5, and the hard is 8 x 8. The larger puzzles are more fun when playing the two-player mode and taking turns back and forth. All of the controls are tap based.  Tap the icon to hear the audio and then tap the next one that you think matches. If they do match up then they will be taken off the board. Rinse and repeat until finished. 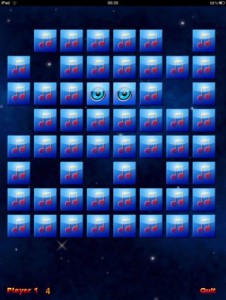 The graphics are ok, a little bland, but let’s be honest, the sound is the main focus of this game. The audio clips used during gameplay are great. A few of them actually made me laugh pretty hard the first time I heard them. You’ll hear everything from cash registers to fog horns to a guy saying, “Wow!”. 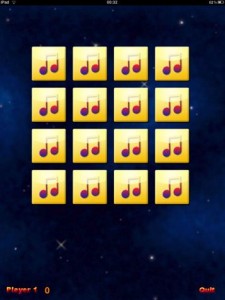 I think this is a great idea. It’s one of those, “Why didn’t someone think of this sooner” ideas. However, there isn’t much differing gameplay. Do we as adults still play the old Memory game with cards? I don’t. I understand that the icons switch sounds every time but I would lose interest playing AudioPairs multiple times.  I could see this being a successful kid’s game. As a matter of fact it even looks like more of a kid’s game than an adult’s game. For $0.99, I’m still on the fence. If you need an iPad game for a road trip to keep your kids quiet, then you should definitely pick up Audiopairs.