When I first got the email asking me to review King’s Cup I honestly didn’t think it would be THAT King’s, you know the drinking game.  I figured it was a dungeon game where you play as a king and you are on a quest to recover the Holy Grail. Nope, it’s the drinking game. As college grad and a beer drinker I am all too familiar with the King’s game. If you cannot be described as a beer drinker then this game and this review are certainly not intended for you. 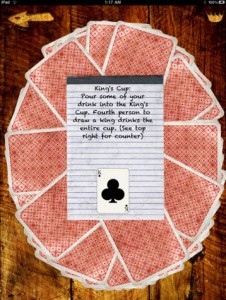 Luckily, I threw a bachelor party last weekend (everyone was over 21) so this game falling in my lap was perfect timing. So somewhere in between the paintball field and the bars I decided to break out the iPad and all of its King’s Cup HD: Party Edition glory.

The game is set up just like the real card game. When your turn comes around you pick a card and the card flips over. However, instead of your inebriated friends arguing what a 4 stands for (come on, we all know that one is) the game simply shows you so there can’t be any mistakes. Additionally, and this is my favorite part of the game, you can customize your own rules. You can literally type in any rule for any card and save it. 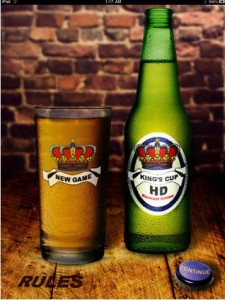 The visuals are well done high def graphics. The cards are dealt out in a circle and once one is tapped it disappears leaving the cards below exposed and tap-able. A small crown is shown in the upper right corner of the screen whenever a king is flipped, so beware when three crowns are shown because you might have to drink the King’s Cup if you choose the fourth king. There’s no audio at all, but honestly if you’ve ever played a drinking game then you know that trying to keep people quiet is impossible. So I can see why it was left out. 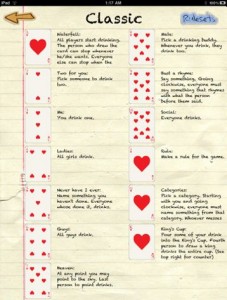 King’s Cup HD: Party Edition was a big hit at the bachelor party but I was a little nervous to say the least. My $500 iPad was being tapped and touched by a group of drinking guys that had sloshing beverages hovering over my beautiful and much used device. If you are somewhat of a partier, an iPad owner, and you think you can get over the fact that with one dropped beer your sweet device will be no more, then I guarantee you will really like this game. If you clean you iPad screen every night before bed and kiss it good night, don’t bother getting this game. You should probably just pick up a $0.99 pack of cards, which by the way is the same price for King’s Cup HD: Party Edition.