The first time I ever played a Deer Hunter game it was on a PC back in the late 90’s. I’m not joking either. It was over ten years ago and believe it or not that version has more gameplay options than this iPad version. 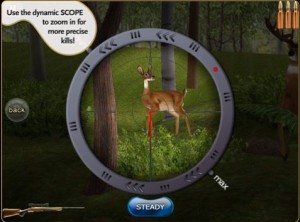 If you have ever played a hunting game, especially one of the many deer focused games then you already have a really good idea how this one goes as well. There are three changeable attributes for each hunting excursion; location, difficulty, and weapon.

There are four locations to choose from including American Midwest, Northern Europe, Western Russia, and finally Northern Mexico.  Each location has different scenic graphics. For example the American Midwest is green forest, while Mexico is rocky desert. The difficulty options include Rookie, Scout, Veteran, and Master. Each difficulty has a certain amount of points that must be earned to progress to the next. Last, but certainly not least, the funniest part of the game – the weapons. You’ll be able to kill digital creatures using a bolt-action rifle, a compound bow, an AK-47 and yes, even a blowgun. As you progress through the game and achieve certain goals (i.e. all head shots) you unlock these weapons and can use them during hunting trips. 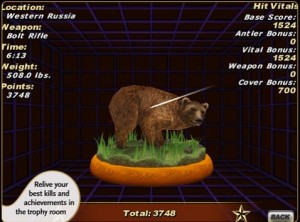 The hunting trips are very basic. Each trip starts with a GPS screen where you slide your finger around stirring up game. When tracks appear all you do is slide over to it and you go directly into the hunting mode. Hunting mode is the 3D hunting view we are all familiar with.  You slide your finger around to aim the crosshairs and tap the screen to shoot. Each location seems to have the same types of animals with the exception of big horn sheep that I only saw in Mexico.

There are other things like equipment that are unlockable, things like binoculars, scent blocker, laser sight, and a call just to name a few.  The disappointing thing about these things is that you don’t actually use them while hunting.  Instead they are automatically used when unlocked.  I find this pretty lame.  Most of this equipment is available in other hunting games for actual use during hunting.

The graphics are unfortunately similar to the graphics of the late 90’s version. They are pixilated and dated. The audio is basic with music during menus and only gun sound effects during the hunting mode. 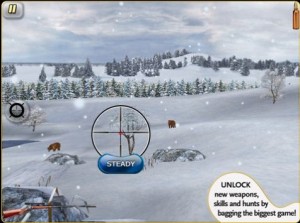 Deer Hunter 3D is going for $9.99 right now in the App Store. I can’t justify paying that price for this game. If it was $2.99, it would be worth it. Don’t get me wrong, there’s a lot of gameplay to be had in this game, but there are quite a few hunting games out there for less than half of that price that stack up just as well.