Tanks, helicopters, and warfare oh my! Modern Conflict is a strategy game where you must take over enemy forts using an ever-growing number of troops. This isn’t you’re your father’s turn-based military game by any means. In Modern Conflict, the quick and intelligent will prevail. 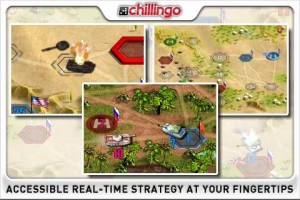 First off let me say that the in-game tutorial is great. It not only teaches you what’s necessary to win the game but also explains the controls and even a little strategy. A quick rundown of the tutorial is this; you are the blue troops. Hexagons are tank bases and circles are helicopter bases. If you tap on a base once you will select half of the troops in that base. If you double tap then you will select all of them. Once you have selected troops you can transfer them by tapping on another base. However, tanks must follow roads and helicopters are free to go wherever. Attacking an opponents’ base is done the same way as transferring troops within your bases.

Each of your bases has a number that represents the amount of troops.  The red bases, the enemy, won’t have a number unless they are attacked or have just taken over a base. One other way to see the number of enemy troops is to hack their communications but this happens on its own with nothing you can do to speed it up. This adds an element of difficulty that does and will create problems for you, especially as the levels grow more difficult. 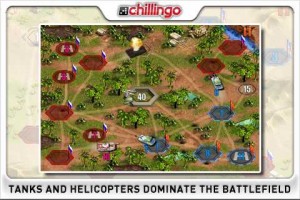 One major aspect of the gameplay that you should know is that your troops regenerate in you bases. So even if you double tap and send all of current troops out you will still have control over that base and more troops will regenerate there. The only way that will stop is if your base gets taken over by the enemy.

There are a few different type of gameplay within Modern Conflict; Campaign, Survival, and Spec Ops. The Campaign mode has a storyline that really wasn’t worth paying attention to which was fine because I really just wanted to blow stuff up and I didn’t want to read. The Survival mode has you put in a hunkered down position trying to stay alive as long as you can. As soon as you think you’ve got the enemy cornered and beat, more of them fly in. The Spec Ops mode is a lot like the Campaign but without storyline. Also beware, the Spec Ops levels are difficult and take a serious time commitment to beat, at least they did for me.

Ok, now down to brass tacks. The aesthetics of the game are good. You fight in different areas like the jungle, desert, and mountains. Each setting has unique attributes like trees, rivers, other environmental details. The music is really good. It’s upbeat with a nice rhythm. The sound effects consist of a lot of sounds, too many to count. Helicopters swooping, tanks rolling, and explosions are constant sounds you will hear during a level of Modern Conflict.

My only complaint about the entire game is a little thing about the controls. They are totally tap based which is good but they are unforgiving for a player with uncoordinated fingers (i.e. – me). Here’s what happens, I tap on my base to select the troops then quickly tap on another base to transfer them or send them to battle.  If you do not tap perfectly on the other base, not simply close to it or near it, but directly on it, you lose your troops and have to go back and do it again.  Now don’t get me wrong, I am nitpicking a little but the small bases are hard to select especially in the heat of battle. 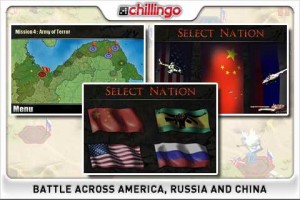 Despite some nagging control issues, this is a great and fun game with hours and hours of gameplay. Better yet, it only cost $2.99. If you are a strategy game nerd like me or just love war games, this is a definite pick up.