The strangely spooky back-story for this game consists of a woman named Heather, the main character who has the ability to see and communicate with spirits. Her abnormal detective adventures take you to several locations where the object of the game prevails over the back story. Paranormal Agency HD is a hidden object type of game that tries to take you on a scary ride. 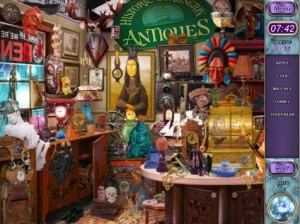 Each location has multiple levels in which all you do is find the objects that are listed on the screen. For example the first level is an orphanage and a ghost has been scaring the children. Well, as the ghost detective in the game you are responsible for banishing that ghost. Fortunately for you, all you have to do is find ten object that are scattered around an old attic. I wonder if all exorcisms are that easy…  Every level looks like your grandparents attic. Random items are packed into a small area and none of them have anything in common with the item directly beside it. But I guess that’s what makes these types of games fun, the more clutter the bigger the challenge.

The game’s graphics are certainly HD, however I still felt at a few points that certain object were still difficult to make out. I have also tried the non-HD iPhone version and it is very difficult to pick out some items so I’ll stick to the HD version. The iPhone version allows a pinch and zoom feature that the HD version doesn’t have. But with it being HD and having a much larger screen I really didn’t feel that that feature was necessary on the iPad. I am pretty happy with the aesthetics of the game. The music is well done and somewhat catchy and the sound effects are not over the top even for the ghostly plot. 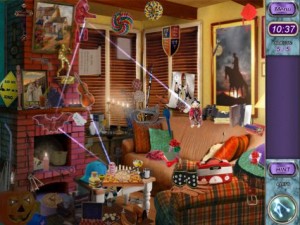 Like most hidden search games, the controls are very simple. All it takes is a tap once you have located an object. The list that tells you which objects to find comes in two forms, the first being simple words like, shoes or telephone. The second, and more challenging form is an outline. The list on the right of the screen will only show a white shape of the object. I found myself guessing a little more with this type of list. Don’t be shy of poking around and guessing but guess too much too fast and you will get a time penalty. 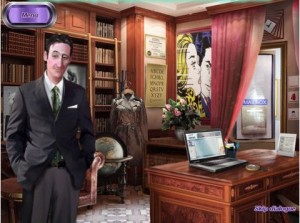 All in all I think Paranormal Agency HD is a fun hidden objects game, but the supernatural story does drag it down. To me the game would have been much better with just the locations and the objects. There really isn’t a need for character dialog and story setup. With that said, there is a ton of gameplay to be had in this game. At $4.99 it’s right in the middle of the field, not too expensive but enough to think twice about. If you like hidden object games and think you can get past a hokey back story then you should give this one a shot.