The one word I would use to describe Stick Golf HD is addictive.  I wasn’t even supposed to review this game. I had to fly for work and wanted a game just to burn some time while I was being laid over. I’m a golfer and was in a golfing mood so I figured I would see what golf games were out there that I haven’t heard of and I stumbled on Stick Golf HD. It was $2.99. Personally I get weary of games that are over $0.99. So I did a little research (like any good buyer – that’s why you’re here right?). Most of the articles I read were good and the iTunes reviews were also good, so I went for it. 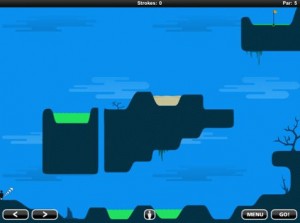 I played Stick Golf HD every moment I could, on the plane, off the plane, even in the hotel room when I got to my destination. I’m still playing it now that I’m back home. I love it. In my mind I keep thinking of a Flash-based putt-putt game that I use to play back in college all of the time. They are similar in a few ways. Golf, obviously is the theme of both games but the draw and addiction to these games lies with the scoring. Unless you have a perfect game, and I mean perfect, you can always shoot a lower score. There are 12 courses in Stick Golf HD and all of them are nearly impossible to shoot perfectly. As a matter of fact, the last course is damn near impossible to shoot under par. I haven’t done it yet and I’ve played that course at least 20 times. It’s extremely frustrating but just as addicting.

Stick Golf HD is a 2D game where you must complete each hole in the least amount of strokes. The controls are button based which is nice when using the big screen of the iPad. The bottom left side of the screen has arrows that control the golfers aim. The bottom right side of the screen has the Menu and Go! buttons. The Menu button will allow you to exit the course and return to the game’s menu. The Go! button starts the power bar. The more it fills the more powerful your shot will be. Tap it again to stop the bar and your golfer will swing. 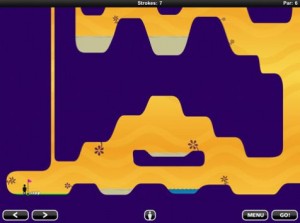 Like real life golf, Stick Golf HD has hazards. Water hazards are a stroke penalty and sand traps stops your ball from rolling. I suggest trying to avoid both. The terrain however is your main opponent within the game. On most holes, ball placement is key. There are very few “grip and rip” holes.

The graphics are simplistic but well done. Each course has a visual theme that is carried out hole after hole. One course has a volcano theme, one has a moon theme, another one has a cave theme, and so on.  With 12 different courses you get 12 different themes. The audio is pretty basic. There are sound effects when you tap buttons and get the ball in the hole but that’s pretty much it. There’s no music during gameplay or menu screens. 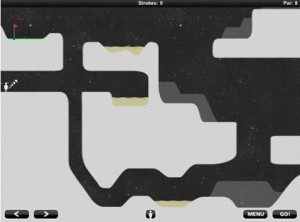 All in all this is a great game. For $2.99, you will get a lot of gameplay and a lot of addiction. The developers at Noodlecake Games has already released an update with four new courses (that was included in the 12, 8 original plus 4 new) so with any luck they will keep pumping those out. Also, I know this is asking a lot but I would love a build your own course feature. Just saying.