Remember back in the day when we were all at recess playing basketball, football, four square, kick ball, and dodge ball? Those were the best days. We didn’t have a worry in the world. Or did we?  Remember that big kid? The one who could throw twice as hard as all the other kids (Editor: I think you are describing me)? Well guess what, he’s back in Danger! Dodgeball HD. 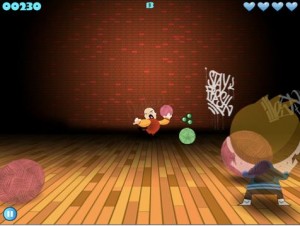 Redeem yourself as you face off against the dodge ball bully once again and this time it will be a lot less painful.  As I’m sure we all know the basic rules of dodge ball, Danger! Dodgeball HD is no different.  Don’t get hit by the ball, that’s the only rule. To help you along your way the developers at Robot Stampede have added Power Ups. These five Power Ups come in the form of green balls that give you special throws. For example, one type of Power Up is the big ball. Once you have picked up the green big ball Power Up a large normal ball will start rolling towards you. All you have to do is pick it up and throw it at the bully. Each Power Up will trigger a special throw that will earn you more points if you can hit the bully.

Before playing the Arcade mode you should definitely go through the training. It will slowly introduce you to the controls and also explain the Power Ups. Once you finish with training it’s time to jump into the Arcade mode. Once in the Arcade Mode you will have to survive 75-second rounds one right after the other. Power Ups and health boosts will roll your way to help but dodging is key. As you progress through the levels everything speeds up. The bully gets faster, the balls roll faster, the Power Ups move towards you faster, and you have to be constantly moving if you want to survive. At the beginning of each level you will get your health replenished so don’t worry if you end a level with only one bar of health left. Here’s a hint: don’t try to catch the thrown balls, you can’t and will get hit. 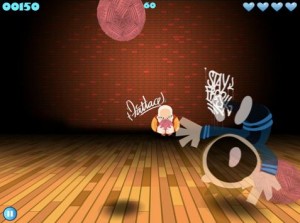 The graphics are fun. They are colorful, bold, and laughable (in a good way). The bully is great. He is fun to watch and extremely comical. I think he’s my favorite part of the game. The audio is also very good. The entertaining, funky music is seamless from the menu into the gameplay, which gives the game a nice smooth feel. The sound effects sound like you are in an elementary school gym watching a real game of dodge ball. There are boings, smacks, and pows, all pretty standard sounds for a game of this nature.

The in-game controls are totally motion based. To move your character across the screen, tilt the iPad left or right. To throw a ball, tilt the iPad forward. That’s it, that’s all of the in game controls. The only time you will need to touch the screen is to start the Arcade Mode or Training.

This is a game with a simple concept, great gameplay, and great graphics. At $1.99 it’s also a great deal. You are constantly playing for a higher score so the amount of game play is virtually endless.  And who doesn’t like dodge ball?