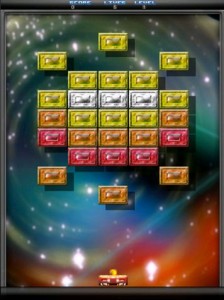 Stackster HD is a classic brick breaking game that isn’t so classic. The aesthetics of the game are extreme but it does keep the classic gameplay just like any other game that breaks bricks.  As soon as you launch the game you get hit with the crazy over the top graphics and intense audio. I loved it. It really sets the tone for how amazing the levels turn out to be. Before you begin playing there is a quick instructional screen that will fill you in on all of the necessities, but pay no attention – its brick breaking and you don’t need instructions!

Once you start your game you will immediately see the coolest backgrounds ever. Imagine tie-dye shirts in space with 3D patterns.  It’s mind-blowing stuff. The developers really took the time and created some amazing visuals. However, as incredible as the graphics are, it’s the music that really drives this game. Just like the visuals, the audio kicks in right from the get go and stays strong throughout the gameplay. It’s a weird mix of rock, techno, and orchestral – and it is excellent.

The gameplay consists of level after level of brick breaking fun. The brick patterns change each level giving the player a new challenge. Stackster HD’s gameplay has all of the bells and whistles you would expect like upgrades that consist of extra lives, multiballs, and paddle extenders. I’m not going to go into super detail on the gameplay of a brick breaking game; I think we all know how they work.  However, I will tell you this. This is no ordinary brick breaking game and Stackster HD is simply a blast to play. 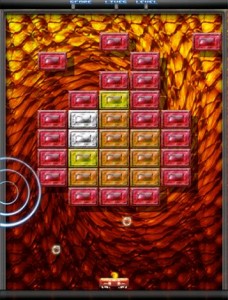 My one and only complaint is that the section of the screen that you slide your finger across could be a little wider. I missed a few balls when my finger went to low and I lost control of the paddle. This really isn’t a huge deal but I feel like I have to say something negative just to keep the developer’s heads from getting too big.

Anyway, go buy this game. If you are in the market for a brick breaking game (who isn’t) and you like to have fun this is the game for you. Oh, and it’s only $0.99. That’s a bingo.