I can honestly say, I’m addicted to this game. I got it about a week ago and I can’t stop playing it. Every free moment I get I pull out my phone and play. It was easy to learn but challenging enough to keep me coming back for more. There are multiple game modes that you can switch back and forth from but the real fun is in “The Big Game.” 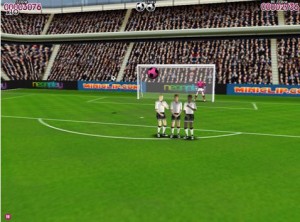 This is a simple enough game, all you do kick penalty shots in a soccer game. As you progress and move on through the levels more obstacles get in your way and you are forced to kick around them. The obstacles of course are players from the other team. Also you don’t always kick from the same location so you have to adjust your kick each time.

There are four game modes to choose from; Target Practice, Vs The Clock, Sudden Death, and of course The Big Game. Target Practice is a non-scoring mode that allows you to free kick with increasingly difficult levels. Vs The Clock mode forces race against a depleting time limit. This is one of two game modes (the other being The Big Game) that has target icons within the goals. The targets include a yellow card, red card, soccer ball, 100 points, 250 points, and only in the Vs mode a clock. The yellow card gives you a goalie only kick, the red card gives you a close up penalty kick, the soccer ball give you an extra chance, the point icons are pretty self-explanatory, and the clock adds time to the remain clock. The Sudden Death mode is a shoot-til-you-miss game that takes shot by shot concentration, because it only takes one miss and its game over. My favorite game and the most challenging is The Big Game. The Big Game is a score based game where it isn’t timed but you only are allowed three misses (unless you hit a soccer ball icon). As you progress through the levels more and more defenders are added making your shots increasingly difficult. In this mode it is imperative to hit the target icons to boost your score. For every shot you hit a score multiplier is added to your next shot, so each shot is more important than the last. Believe me, you’ll hate missing that 250 icon when you have a x10 multiplier. It stings.

I like simple looking, sampling sounding games that have great gameplay and this is exactly that. The graphics and sound are in no way bad but they are not what the game is about. This game is about score goals not how clearly you can see the goalies jersey. The audio is pretty fun actually. I haven’t had the notion to turn it down unless it was bothering someone around me. There’s a little sound bite of audio in the menus but the in game audio consists of crowd noise and the proverbial soccer announcer.

The controls are amazing. If you would like the ball to curve around the defenders on the left, then you swipe your finger to the left of them. That does make it sound easier than it is but you will get the hang out it after a few practice rounds. And the great thing is, you really do get better at this game with practice. The more and more I play, the better my scores.

At $.99, this is a must buy game. I have five other games I should be playing and reviewing but I can’t stop playing this one. It’s by far the most addicting soccer game I have ever played.