Tiger Tiger Woods Y’all! If you aren’t familiar with Electronic Arts’ (EA) golf series, Tiger Woods PGA Tour, (TWPT) then get out from under that rock. They have had games for Playstation 1 and 2, Xbox and Xbox 360, mobile devices, and many other platforms. Needless to say their most popular platforms are the console versions for Playstation and Xbox. But I’m not here to talk about those (even though I’ve owned four different versions of TWPT for both consoles) I’m here to tell you about the new TWPT 12 for the iPad. 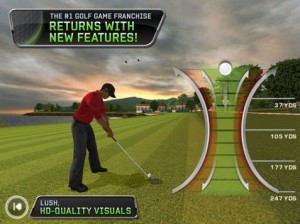 I’ll be honest with you. This is one bad mamma jamma. I love this game. It’s better than the first version I bought for Playstation 1.  If you are a golf fan, the actual sport not just the video games, than you will love everything about this game. It is a borderline simulation game. It’s very realistic. There are many things you can do to affect the flight of the ball. You can change swing styles, ball rotation and change your backswing.

The graphics are very crisp. It’s amazing how far technology has come but to progressively see the difference in a game series year after year is quite amazing. Last year’s TWPT was a good game (I tested it for iPhone) but the new one is better in every way: graphics, audio, and gameplay. EA even added interactive play through Facebook, where you can play a hole with a closest to the pin challenge. And if that wasn’t enough you can play instantly head to head via WiFi. 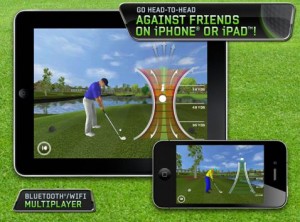 Like all sports videogames the commentary gets pretty old after a while. You can only hear, “Ya he’s in the long stuff,” so many times. Turn it off and listen to some music. Right now iTunes is showing a lot of reviews that say they experienced crashing. I have played probably close to ten hours and can’t remember mine crashing. So I don’t know what to tell you about that.

I’m not going to get into the details about the graphics and the audio. This is an EA game so expect high quality. However, with quality also comes cost. The iPhone, non-high def version will run you $4.99. The iPad HD version is a hefty but worth it $9.99. 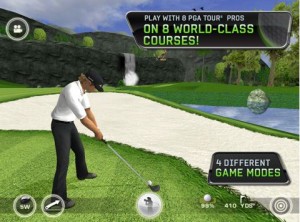 I say it’s worth it because there are days and days of gameplay available. There are four game modes, head to head, Tiger Challenges (mini games to earn money), PGA Tour (where you play against some of the best names in golf) and quick play that lets you get on the course and start swinging.